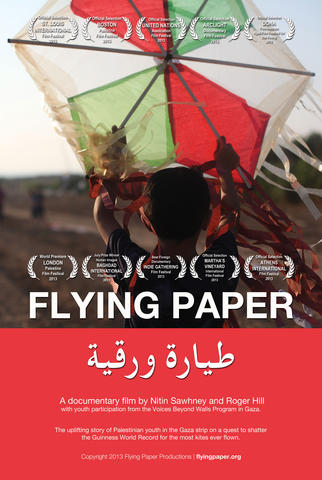 We closed 2016’s festival with these moving films. Profits from the ticket sales and donations for the food went to Flying Paper Productions to enable ongoing media productions in the Gaza Strip.  Flying Paper Productions work with local Palestinian journalists and artists in Gaza to create thought provoking short documentaries that highlight the daily struggles of talented artists living and working in the Gaza Strip.  “Return to Seifa” and recently released “Tawfiq’s Reef” are the first of these productions and can be watched online by clicking on the Return to Seifa link above.

Flying Paper, directed by Nitin Sawhney and Roger Hill, is an uplifting story of Palestinian youth in the Gaza Strip on a quest to shatter the Guinness World Record for the most kites ever flown. A film co-produced with young filmmakers in Gaza, the film is intimate and direct, following the lives of a handful of young Palestinians in the simple act of making and flying kites in the desolate yet stunningly beautiful landscapes of Gaza. The extraordinary stories of the young people involved leaves the audience with a new understanding and connection to life on this enigmatic little strip of land on the Mediterranean.

Return to Seifa follows the progress of two siblings in the film, Flying Paper. Now young adults, they confront the aftermath of war, adapting to the harsh realities of yet another violent disruption to their hopes and aspirations. This is a deeply moving story about the impact of war on communities, especially its youth. It includes powerful images taken by award-winning photographer Anne Paq, working closely with young Gazan journalist Abeer Ahmed.