Proudly presented with Otley Film Society, this will be a fundraiser for Open Bethlehem

When comedian Jeremy Hardy was asked to visit Palestine and do his bit to solve the world’s longest running conflict, facing the world’s fourth biggest military power was not his idea of a holiday. On the other hand, neither was travelling to Florida to spend Easter with his in-laws. What he didn’t know, as he arrived in Tel-Aviv a week later, is that he would become one of the most unlikely witnesses to a horrific yet seminal moment in the struggle of the Palestinian people.

Disastrously unprepared, Jeremy suddenly found himself dodging bullets and running for cover as the realities of life under occupation begin to emerge, and it’s no laughing matter. As the danger mounts and the rubber bullets are exchanged for live ammunition, the courage and determination of those who risk everything to help the Palestinian people is tested, and for the first time, the terrifying life of a human shield was captured on film. Jeremy Hardy Vs The Israeli Army is a quirky, moving story about the courage and resolve of those who pack their bags for Palestine to stand in the way of tanks and bring an end to the occupation. 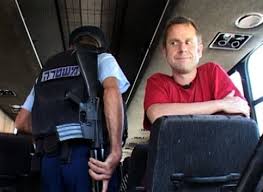 “….an honest, sympathetic endeavour that offers another angle on a seemingly interminable injustice.” Time Out

“This outstanding documentary from film-maker Leila Sansour follows the stand-up comedian Jeremy Hardy as he travels to the occupied West Bank in Easter 2002 at the invitation of the International Solidarity Movement of Palestine.” Guardian

Followed by Health under Occupation, a MAP documentary with Jeremy Hardy and Imran Yusuf as they visit the West Bank to see how fifty years of military occupation have impacted the health and dignity of the Palestinians who live there. Read more, and take action: www.map.org.uk/actnow